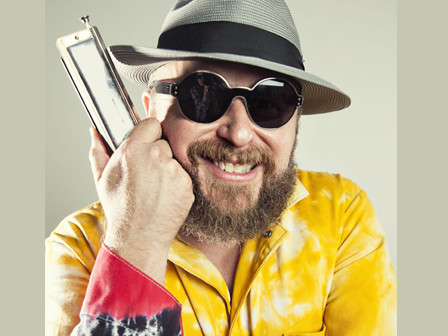 John Nemeth and The Blue Dreamers

Don’t try to snatch him back and hold him, he’s a man on the move. John Németh had already established himself among the very top ranks of blues musicians and modern soul singers when he decided to break the mold with his latest record, FEELIN’ FREAKY. Németh fearlessly crushes all barriers of style and genre with an album of original songs that defies all the usual pigeonholes. Drawing from his strong influences in blues and R&B, as well as contemporary sounds in hip hop and rock & roll, John creates music that is personal as well as universal, and owes its origin to no one but John Németh. John’s songs are groove and melody-driven, laced with thoughtful lyrics and nuanced humor, and cover themes from social issues of gun violence and class values to the pure hedonistic joy of dancing, sexuality and marijuana. He creates his songs from melodies and phrases he draws from the sounds of life, from early-morning Memphis songbirds to the din of the city.

Németh is simply one of the best 'blue-eyed' soul singers of his generation, his shows are pure entertainment, groove and joy. His two previous appearances on The Extended Play Sessions stage were complete sell-outs with packed rooms and joyous, raucous crowds. This one will be NO DIFFERENT!

Doors open at 6, music starts promptly at 7 - your ticket includes a light buffet while it lasts and a cool souvenir poster.  We have a wine & beer bar for your drinking pleasure!