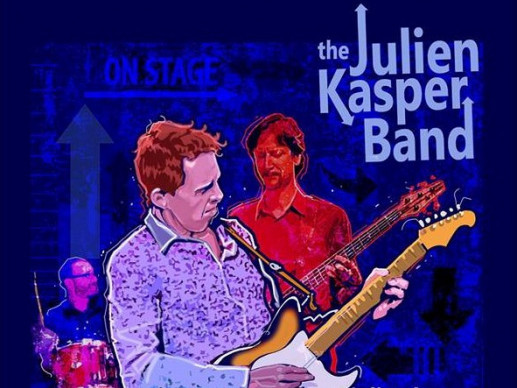 Animated by the exquisite soundscape created by the likes of Jimi Hendrix and Jeff Beck, Julien Kasper has constructed a deep bluesy, funky, rockish jazz shaped identity of his own.  Each of the 2 previous times he has performed on our stage, the brilliance of his guitarwork and unique jazz funk/fusion has just blown us away.  We cannot be more excited about his return.

In addition to writing, performing, and recording his original music, Julien Kasper is a guitar professor at Berklee College of Music and an avid all-season surfer dude.

The international blues and jazz community became aware of Julien's prowess through his work with pianist and Hammond B3 organist Bruce Katz on their extensive tours throughout the US and Europe.  While Julien’s guitar playing genius stands on its own, his sound is enormously enhanced by his choice of playing partners: the Falllout Shelter's favorite bassist, Jesse Williams and drummer Zac Casher - who have between them, performed and recorded with a who’s who of American roots and groove masters: Johnny Adams, Duke Robillard, Mighty Sam McClain, Immani Coppala, D’Angelo, Jay McShann, Henry Butler, and countless others.

Check out the videos below from their previous appearance.

Doors open at 6, music and livestreaming starts promptly at 7:00 . Ticket price includes admission, a cool original souvenir poster and a light eats buffet while the food lasts.  We have a cash wine & beer bar for your drinking pleasure.