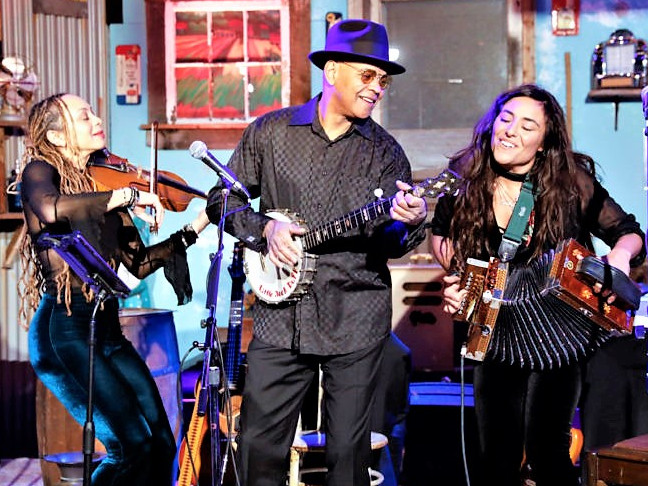 GUMBO GRITS & GRAVY is a soul-filled, heartfelt happening of the first order. Two years ago. this trio of musical genius began their special collaboration right here on our Norwood stage before taking it on an international tour. Ask anyone who was there - their musical talent and their engaging personalities combined to provide a truly memorable experience.  For this two night event, they are bringing a percussionist, new material and perhaps with some other surprises.  A not-to-be-missed show.

ANNE HARRIS: BLUESICIAN
"So talented, so beautiful, so much fun to watch! Those are the thoughts that will come to mind when you witness Anne Harris performing." - Blues Blast Magazine 2021. She is a singer and songwriter but she is best known for her virtuosity on the violin and her wonderful "gypsy-like" stage presence. In addition to touring internationally with GGG and the great Otis Taylor, she has won multiple awards including most recently a Best Actress award for the multiple award winning short film "The Musician" which features her as a Chicago street musician,.

MARCELLA RENÉ SIMIEN: SWAMP SOUL SONGSTRESS
Raised in the heart of Cajun country, this daughter of two-time Grammy award winning Zydeco luminary Terrance Simien was practically born onstage. Several years ago she took her Cajun roots and moved to Memphis where she quickly carved out a niche of her own.  Per Grammy award winning producer Boo Mitchell, Marcella is “one of the most soulful artists I've heard since the glory days of Memphis soul music. Her sound and stage presence is a constant reminder that soul music is still alive and well.” A pianist, accordionist, washboardist, singer, songwriter who conveys joy when she performs like few others.

GUY DAVIS: AMBASSADOR OF THE BLUES
The son of two prominent actors, Guy Davis has spent his musical life carrying his message and music literally around the world, In addition to being a guitar playing, harmonica blowing, singing, songwriting, internationally famous blues-smith, he is also an author, a teacher, a history-buff, a Broadway, film and television actor and a storyteller.  Whether with GGG, a pick-up ensemble or as solo performer, he has always had the Fallout Shelter audience in the palm of his hands.

For this show, note that the doors open at >6:30<, and the music and video start PROMPTLY at >7:00>.  Your ticket purchase includes an original design concert poster. We also have a wine & beer bar for your drinking pleasure.