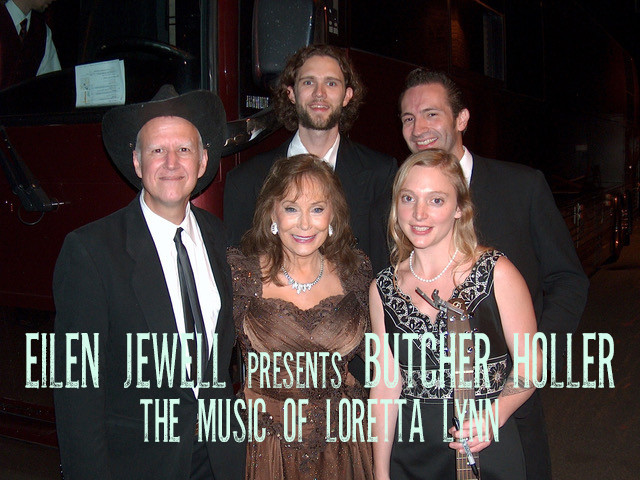 The Music of Loretta Lynn!

EILEN JEWELL PRESENTS BUTCHER HOLLER - The Music of Loretta Lynn. It began as a side in 2010 project that now lives again, album being re-released in 2023 as an extended version.

"Butcher Holler is named for the little Kentucky town where Loretta Lynn was raised. In this tribute to the country star we pay homage to her humble roots and straightforward, hard-hitting performance style. All of the songs in this collection were written by Lynn herself and are a
testament not only to her strength as a songwriter but to her personal strength as well. In the 1960s and 70s, Loretta Lynn dared to write songs about topics that were widely considered off-limits, especially for women. The fact that her words still hita nerve today is proof of their timelessness. And so, a toast: to the woman with more banned songs than anyone can count; to that voice that reaches the very grain of the theater walls around her; to our national treasure. Gratitude is not enough, so I sing these songs for any who will listen."
- Eilen Jewell (2010)

BOISE, Idaho — American Songwriter describes Eilen Jewell as “one of America’s most intriguing, creative and idiosyncratic voices.” That singular voice springs forth from a woman of more than one mind, and she taps into many of them in what has become a stellar career with a brilliant resume.

By turns personal and political, pissed off and blissed out, Jewell’s first album of original material since 2015 expands brief moments of joy into lifetimes, and distills epic sentiments and persistent doubts into succinct songs. Yet rather than pulling artist and listener this way and that, the tensions within and between these 12 tracks propel her eighth studio album forward as a remarkably cohesive full-length.

This is going to be one of the most legendary events we've ever held at The Fallout Shelter. To be able to host and film an artist of this stature and level of success is a blessing.