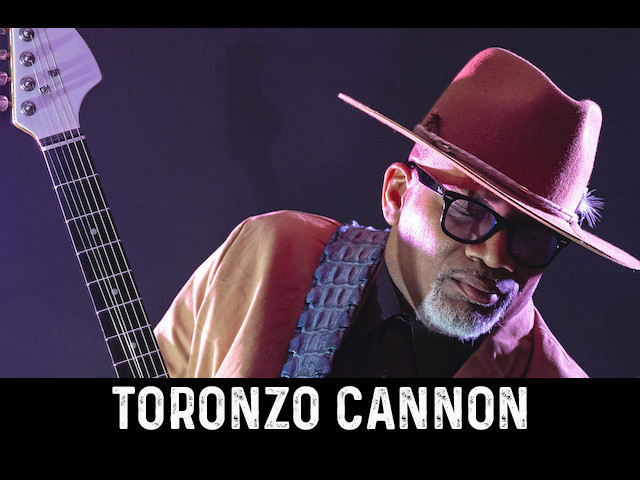 TORONZO CANNON At The Fallout Shelter

A Night of Incredible Chicago Blues!!

Cannon is at the front rank of Chicago bluesmen. He creates wide-screen modern arrangements for wry, thoughtful songs, molding an ensemble sound that’s both tempestuous and scrupulously controlled." –MOJO

Chicago bluesman Toronzo Cannon defies all expectations. The blistering guitarist, soulful vocalist, singular songwriter and city bus driver fuses his muscular, rock-inspired blues guitar playing with his original, keenly detailed slice-of-life songs, blazing his own blues trail. With the 2016 release
of his Alligator Records debut, 'The Chicago Way', Cannon burst onto the international stage as one the most electrifying bluesmen to emerge from Chicago in decades. His live performances unfailingly earn him heaps of critical praise and hordes of wildly enthusiastic fans. Cannon has played major cities all over the U.S., Canada, and Europe. He recently performed for the first time in Japan, delighting and surprising audiences with one unforgettable gig after another. Now, with the release of 'The Preacher, The Politician Or The Pimp', Cannon builds upon the foundation he's laid, creating and defining his vision of contemporary blues.

To see an artist at this level of International stardom in a setting like The Fallout Shelter is going to be an unforgettable experience and one you will be glad you had!

The Fallout Shelter is an all ages performance venue welcoming worldwide, world class music in an intimate setting. Our studio audience attends to watch the creation and production of the music television series The Extended Play Sessions. The Fallout Shelter events are immersive experiences for both audience and performers alike...a live music experience like no other.

We have a wide selection of beer and wine for your adult beverage pleasures and each show comes with a free commemorative event poster.Seating is General Admission and the doors open at 6PM. We recommend you arrive when the doors open.