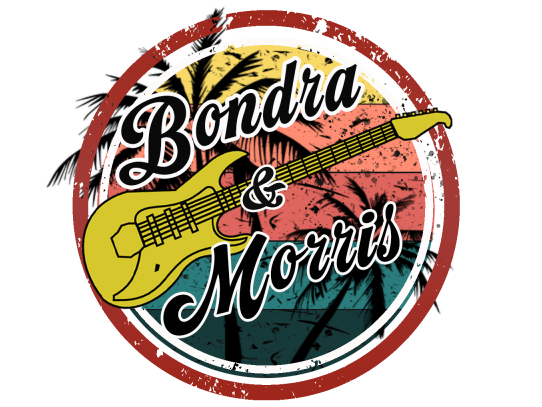 This is something new for the Fallout Shelter...we've hosted dance parties in the past and we've had quite a few Private Functions that included a dance-floor but we've NEVER filmed an Extended Play Sessions with a dance-floor!! This band just HAD to have a floor and room to dance!!

The brainchild of two time Grammy nominated guitarist Tyler Morris, Bondra & Morris is Boston’s newest premier country band. Performing all
the hits from artists like Luke Combs, Kieth Urban, and Jason Aldean, the band promises to have you on your feet dancin’ from the infectious
grooves of the rhythm section, singing along with the powerhouse vocalist Cody Bondra, and jaws droppin’ from the ground-shaking guitar solos.

Frontman Cody Bondra is a veteran of the rock and country scene in New England, having toured with his own band (and a few others) for
quite some time now. With his range and prowess on lead vocals, Bondra & Morris is able to play a wider range of country and rock tunes,
ensuring there’ll be a little bit of something for everyone!

Lead guitarist Tyler Morris is an absolute force to be reckoned with on the 6-string. Having cemented his legacy as a masterful blues and
rock guitar player, it’s no surprise he can rip the intricate modern and old-school country licks with the best of them. Don’t blink or you
might miss it, as he sets the room ablaze with the heat coming off his Telecasters.

Rhythm is an integral part of country music, and no one holds the groove down tighter than drummer Matt Kelley. Matt’s like one of those
atomic clocks that scientists use to tell absolute time, and he seldom misses a beat. Having played in premier wedding bands and other
various party bands for years, he knows exactly how to keep you on your feet and movin’ to the tunes. And when he does step out for a
solo or two, good luck picking your jaw up from the floor.

Bass duties in Bondra & Morris are split between the impeccable Chris Heine and Fallout Shelter producer Connor Quigley. A booming low end
is an important supporting cast-member for this kind of music, and whether it’s Chris or Connor on the gig, you’ll feel the bass in your
chest, thumpin’ along in lock-step with Matt’s drums.

If you like Kenney Chesney, Luke Bryan, Blake Shelton, and even Bon Jovi, this one’s for you. So call up your friends, crack a beer or three,
and get on your best dancin’ boots, because a night with Bondra & Morris is a night you won’t forget.

The Fallout Shelter is an all ages performance venue welcoming worldwide, world class music in an intimate setting. Our studio audience attends to watch the creation and production of the music television series The Extended Play Sessions. The Fallout Shelter events are immersive experiences for both audience and performers alike...a live music experience like no other.We have a wide selection of beer and wine for your adult beverage pleasures and each show comes with a free commemorative event poster.
The Fallout Shelter requires proof of Covid Vaccination for entry. Please have your card or a photo for entry. Seating is general admission and the doors open at 6PM. We recommend you arrive at the time the doors open.