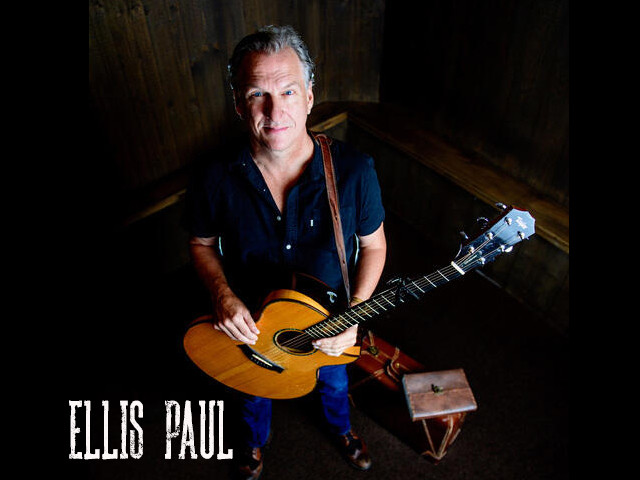 Ellis Paul at The Fallout Shelter

A Once in a Generation Songwriter

"Despite his success and sense of history, Mr. Paul remains an artist with his eye on the future and an interest in discovering the transformative
potential in his music."  - The New York Times -

Some artists document their lives through their music. Others chronicle their times. It’s a rare artist who can do both, telling their own story through songs that also encapsulate the essence of people and places who have helped define their era overall. Woody Guthrie comes to mind, and so does Bob Dylan. Bruce Springsteen certainly as well. Yet few others, for whatever genius they may possess, can relate their own history to the history experienced by those who find that common bond, be it in a coming of age, living through the same realities or sharing similar experiences.

Ellis Paul is one of those gifted singer/songwriters. Though some may refer to him as a folk singer, he is more, for lack of a better word, a singular storyteller, a musician whose words reach out from inside and yet also express the feelings, thoughts and sensibilities that most people can relate to in one way or another, regardless of age or upbringing. The exhilaration of the open road. A celebration of heroes. The hope for redemption. Descriptions of those things that are both near and dear. The sharing of love...,intimate, passionate and enduring.

These are the scenarios that emerge from Ellis Paul’s new album, Chasing Beauty, a set of songs which detail, in typical Paul fashion, stories of people and places that reflect larger truths about us all. “Kick Out the Lights (Johnny Cash)” pays tribute to that fearless American icon name-checked in its title. “Plastic Soldier” offers homage to a wounded soldier returning from Afghanistan. A real-life barnstorming pilot takes the spotlight in “Jimmie Angel’s Flying Circus,” while iconic Boston blue-collar musician Dennis Brennan takes the focus in “Waiting on a Break.” Even the Empire
State Building and the Boston Red Sox get their due, via “Empire State” and “UK Girl (Boston Calling),” respectively.

In reality, these stories are a continuation of tales Paul has told for more than a quarter century, over the expanse of nineteen albums, numerous critical kudos (15 Boston Music Awards alone), inclusion in several movie soundtracks, and stages he’s headlined both near and far. “I’ve got a
car with over 475,000 miles on it, and it's my third road vehicle, ” Paul declares. “I’ve been doing 200 shows a year for over twenty years.
There isn’t a town in the country where I won’t find a friend. I’m a nomad. And I’m gonna write and play until I’m gone.”

Ellis played the "old" Fallout Shelter on Lenox Street almost a decade ago and we are proud, honored and super-stoked to see him again!

The Fallout Shelter is an all ages performance venue welcoming worldwide, world class music in an intimate setting. Our studio audience attends to watch the creation and production of the music television series The Extended Play Sessions. The Fallout Shelter events are
immersive experiences for both audience and performers alike...a live music experience like no other.We have a wide selection of beer and wine
for your adult beverage pleasures and each show comes with a free commemorative event poster.The Fallout Shelter requires proof of Covid
Vaccination for entry. Please have your card or a photo for entry. Seating is general admission and the doors open at 6PM. We recommend you
arrive at the time the doors open.