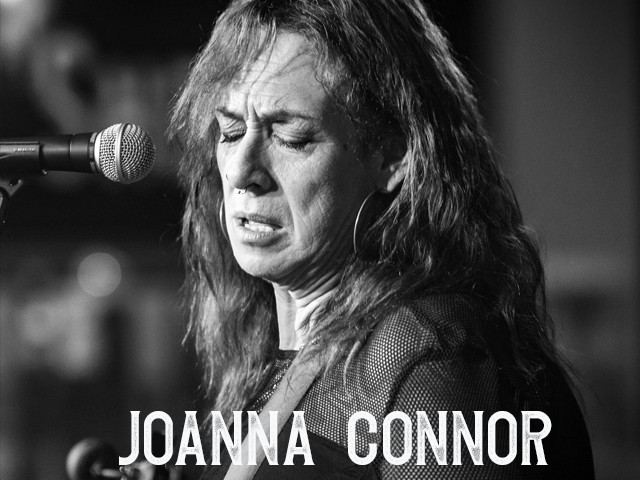 LIVE from The Fallout Shelter

Joanna Connor is widely considered and well deserved to be the Queen of Blues Guitar. A career that spans more than three decades in the rough trenches of not only the 'blues' world, but also the testosterone overdosed music business, Connor has risen to become a world class musician, a solid bandleader and as a woman, a terrific role model to a contingent of rising young women in the blues. On this , her second trip to The Fallout Shelter, she is armed with a new collection of music that draws from many different directions but is always purely Joanna Connor. Her skill as a guitar player is at times jaw-dropping but her stage presence and ability to just flat out entertain is the conduit from which her guitar playing draws it's energy.

It’s been three years since the release of Connor’s 12th studio album, Six String Stories, but she’s planning to release a new album this summer. The album has been described as a mash-up of blues meets hip-hop with elements of jazz, soul and acoustic music.

“I’m very excited about it. I have the best band I’ve ever had in my life. They’re amazing. Every night now is a treat,” Connor said. “And I tapped into some local talent that aren’t as well known but I love.”

Connor performs three nights a week at Kingston Mines and works with up-and-comers through the Chicago Blues Camp at Roosevelt University. She said she tries to support young musicians the way Lonnie Brooks and Dion Payton embraced her in the ’80s.

“It’s how the music continues,” Connor said. “It’s now my turn to help others in their journey.”

Joanna will be offering a Slide Guitar Masterclass on Tuesday afternoon, August 23 from 4-6 PM at The Fallout Shelter. It is a rare opportunity to sit, converse, learn and draw from her vast experience in the touring musician sphere. I urge anyone who knows a young woman or a young man who is starting a career in the music business and is dedicating themselves to blues guitar attend this supremely rare opportunity. In fact that goes for anyone actually...this woman can flat out shred and if you're a player at any level...you're gonna learn a lot. The masterclass will be $20 payable at the door. All ages are welcome. ALL proceeds go directly to keeping these musicians on the road!

The Fallout Shelter requires proof of COVID - 19 Vaccination prior to entry. Our doors open at 6PM and the show starts at 7:30PM sharp. We recommend you arrive close to when the doors open as the seating fills up fast.

The Fallout Shelter is an all ages performance venue welcoming worldwide, world class music in an intimate setting. Our studio audience attends to watch the creation and production of the music television series The Extended Play Sessions. The Fallout Shelter events are immersive experiences for both audience and performers alike...a live music experience like no other.We have a wide selection of beer and wine for your adult beverage pleasures and each show comes with a free  commemorative event poster.