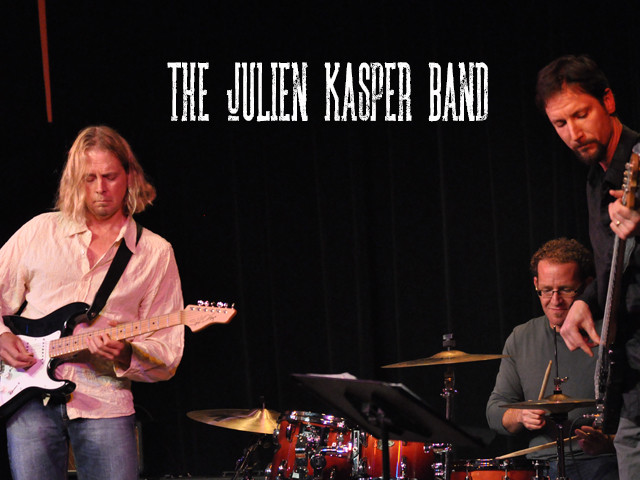 Julien and his band have just released their third album, Trance Groove, which showcases Julien's strongest playing and writing to date. The textures, grooves, and sounds are rooted in blues/rock and funk while interplay of the musicians, vivid harmony, chromatic sensibility, and
intertwining themes reveal high level jazz players displaying a rare marriage of virtuosity and musicality.

"Julien Kasper may be hard to "categorize" for blues fans, because he doesn't "sound like" anybody. Instead, he takes an intellectual look at all
styles of music and combines them to produce a sound uniquely his own. There are soaring runs reminiscent of Sixties' psychedelia, jazz-tinged riffs that would make Charlie Christian smile, and sonic rock swirls and techniques that any fan of Cream or The Yardbirds could relate to. That's why "Trance Groove" is such an enjoyable listen---there's something here for all music fans to enjoy!" - Sheryl Crow - Nashville Blues Society -

No matter the source Julien Kasper gets rave reviews for his creativity, ability to expand and bend genre and his complete mastery of the guitar. His shows are always a clinic on how to master an instrument whether himself or his rhythm section of Jesse Williams on bass and Zac Casher on drums. This is a holy triumvirate of Berklee School of Music masters!!

The Fallout Shelter requires proof of COVID - 19 Vaccination prior to entry. Our doors open at 6PM and the show starts at 7:30PM sharp. We
recommend you arrive close to when the doors open as the seating fills up fast.

The Fallout Shelter is an all ages performance venue welcoming worldwide, world class music in an intimate setting. Our studio audience attends to watch the creation and production of the music television series The Extended Play Sessions. The Fallout Shelter events are immersive experiences for both audience and performers alike...a live music experience like no other.We have a wide selection of beer and wine for your adult beverage pleasures and each show comes with a free  commemorative event poster.