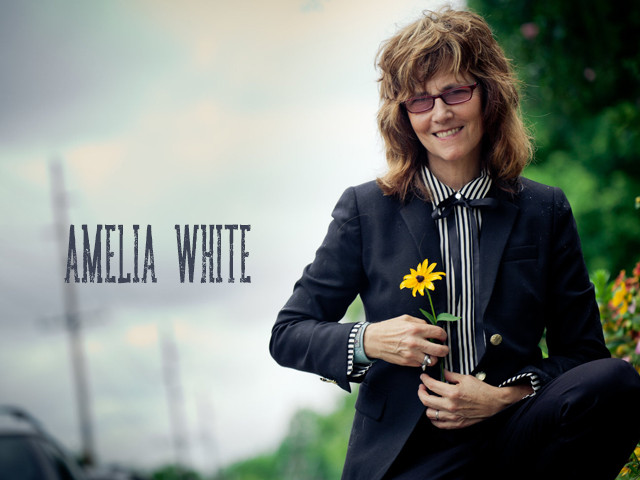 If there were an East Nashville Music Hall of Fame, Amelia White would already be in it. The now-famous scene was in its formative days when White arrived from Boston in the early 2000s and became a fixture at the Family Wash. She’s been a leading light in America’s most musical zip code ever since, even as she’s developed a reputation in the rest of the U.S. and Europe as a first-rate songwriter. She helped define and refine the core folk-rock sound of Americana, yet her band’s energetic pulse never outshines her carefully wrought lyrics. She’s a poet who’s been compared to more famous songwriters for years; now, it would be more appropriate to use her as a benchmark.

“As a songwriter, I feel obliged to tell the stories that are coming through in the air to me in my world whether it’s personal or political or both. That can be hard,” White says. “The antenna is always on. Man, you’ve got to feel a lot. It’s a heavy load sometimes.”

She’s shared shows with the likes of Brandy Clark, Asleep at the Wheel, John Prine, and Justin Townes Earle, as well as performed for a handful of folks in unknown cafes. “There was a point in my career where I realized you have to go out and knock on doors with your songs,” she allows. “They need to be sung for people and that means a relentless tour schedule. If I were a trucker I’d be rich.”

Amelia White doesn’t chase opportunities. She chases songs and gives her entire focus to the listeners and fans who show up, year after year, to commune with her music. Her songs and co-writes have been recorded  by some of the great names of Americana music; Anne McCue, Julie Christensen, Wild Ponies, and Tony Furtado.  “When faced with whether to go out in Nashville and schmooze, or take a walk and start a song in my head I’d always choose the SONG,” she says. “And sometimes I feel that I pay for that.”

Our doors open at 6PM and the show starts at 7:30PM sharp. We recommend you arrive close to when the doors open as the seating fills up fast.The Fallout Shelter is an all ages performance venue welcoming worldwide, world class music in an intimate setting. Our studio audience attends to watch the creation and production of the music television series The Extended Play Sessions. The Fallout Shelter events are immersive experiences for both audience and performers alike...a live music experience like no other.We have a wide selection of beer and wine for your adult beverage pleasures and each show comes with a free  commemorative event poster.