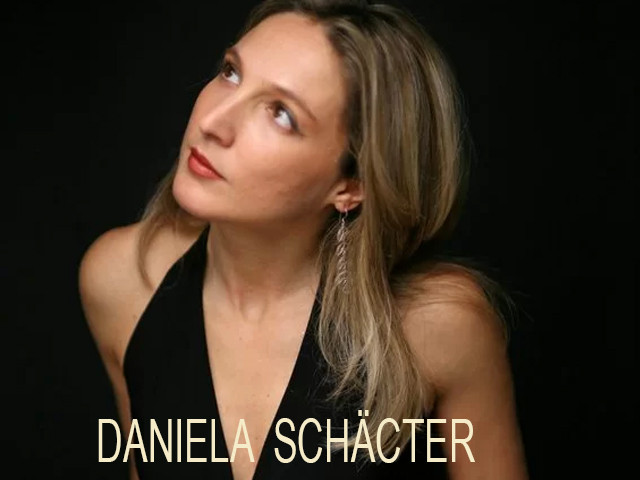 The World Class Singer and Pianist

Returns With the Quartet!!

When we say "world class" musician...well, the accolades and accomplishments of this incredible woman are virtually second to none. Read away!!

Daniela Schächter started early her musical career: by her mid-teens was already performing publicly in Sicily, Italy, as well as doing studio session work. After her classical studies she moved to Boston MA as recipient of a scholarship to the Berklee College of Music, where she studied with Phil Wilson, Joe Lovano, Hal Crook and above all with Joanne Brackeen. Daniela has won many prestigious awards, such as the Mary Lou Williams Jazz Piano Competition 2005, The Sister in Jazz Competition 2002, the Betty Carters Jazz Ahead Competition 2002, the Terri Lyne Carrington Endowed Scholarship, the Tindari 93, Prize for thebest jazz duo with her brother Davide and also she appeared in the Jazziz magazine collector's CD (July 2001).

She was awarded a full-tuition scholarship to the Henry Mancini Institute for one month; there she met Billy Childs her favorite composer. Daniela has performed at the Brass Group Jazz Festival, the Umbria Jazz Fest, the Cape May Jazz Festival, the Cleveland Jazz Fest with the Rainbow Big Band, the International Trumpet Guilt Conference, the Kennedy Center, the Sarasota Jazz Festival, the Cape Cod Jazz Festival, The Blue Note with The Tiger
Okoshi Quartet, Symphony Hall with the Boston Pops and Patti Austin, the Ravinia Jazz Festival with the Count Basie Big Band and the Hollywood Bowl. Daniela has performed with John Clayton Jr. and the Clayton-Hamilton Jazz Orchestra, John Dankworth, the New York Voices, Terri Lyne Carrington, Patti Austin, Regina Carter, Christian McBride, Ingrid Jensen, Tiger Okoshi, Shirley Horn, Al McKibbon and Phil Wilson among others.

Our doors open at 6PM and the show starts at 7:30PM sharp. We recommend you arrive close to when the doors open as the seating fills up fast. The Fallout Shelter is an all ages performance venue welcoming worldwide, world class music in an intimate setting. Our studio audience attends to watch the creation and production of the music television series The Extended Play Sessions. The Fallout Shelter events are immersive experiences for both audience and performers alike...a live music experience like no other.We have a wide selection of beer and wine for your adult beverage pleasures and each show comes with a free  commemorative event poster.