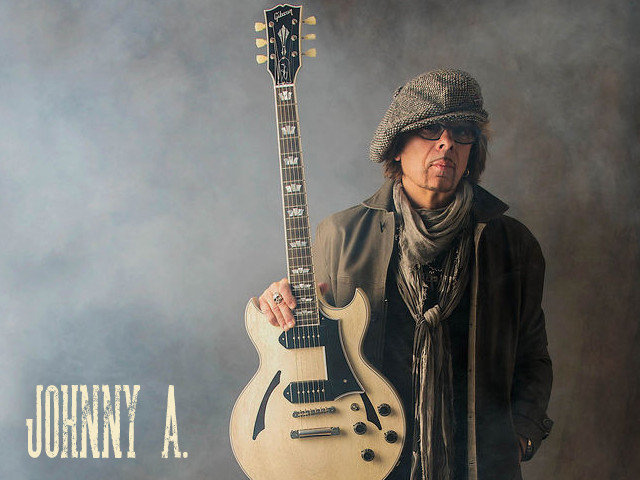 Get Directions
FACT: You will not see this world renowned musician in a more intimate, up-close, personal and conducive setting...EVER!

The take-no-prisoners attitude has been ingrained in Johnny A. since he first set foot on a stage, whether as leader of locally-acclaimed Boston acts like Hearts on Fire or in the company of acclaimed artists like J. Geils frontman Peter Wolf – whose band he anchored for more than seven years. It fully came to the fore in 1999, when he independently issued his first solo album, Sometime Tuesday Morning – a disc that eventually went on to sell 100,000 copies and spawn “Oh Yeah,” a single that topped the AAA charts (a feat no instrumental song had accomplished in more than a decade).

Lots of folks throw around the phrase “let the music do the talking,” but only a few have the fortitude to really do it – to just go out there and play, shunning flash, shrugging off image and reeling in the listener on the strength of the songs alone.

Johnny A. is that kind of performer. For the better part of three decades, the Massachusetts-based guitarist and bandleader has proven himself capable of generating heat at venues from working-class bars to international amphitheaters – and every sort of venue in between. And when the house lights are turned up, he’s just as adept at captivating serious students of the six-string with a virtuosity that earned him therare honor of having his name placed on a signature Gibson® guitar.

That new approach won plenty of accolades from outlets like the Boston Phoenix, which dubbed him “a singular presence on the Boston rock and pop scene, winding jazz, blues, popular tunes, rock, and flourishes of psychedelic improvisation into a tight, passionate ball.” The success of Sometime Tuesday Morning led to a second release, Get Inside, which brought forth a radio hit in the form of the title track – and drew the folks at Gibson®, who approached Johnny to collaborate on a custom guitar, the second best selling signature model in the company’s illustrious line of instruments.

Johnny A spent a lot of time as Boston's "best kept secret" but that was long ago. He's been one of, if not, the best musicians to come out of Boston maybe EVER! He's a master...brilliant in execution of both his skill as a guitarist and his incredible performance presence. This is a rare opportunity to see him in an intimate setting like The Fallout Shelter.

The Fallout Shelter requires proof of COVID - 19 Vaccination prior to entry. Our doors open at 6PM and the show starts at 7:30PM sharp. We recommend youarrive close to when the doors open as the seating fills up fast. The Fallout Shelter is an all ages performance venue welcoming worldwide, world class music in an intimate setting. Our studio audience attends to watch the creation and production of the music television series The Extended Play Sessions. The Fallout Shelter events are immersive experiences for both audience and performers alike...a live music experience like no other.We have a wide selection of beer and wine for your adult beverage pleasures and each show comes with a free  commemorative event poster.