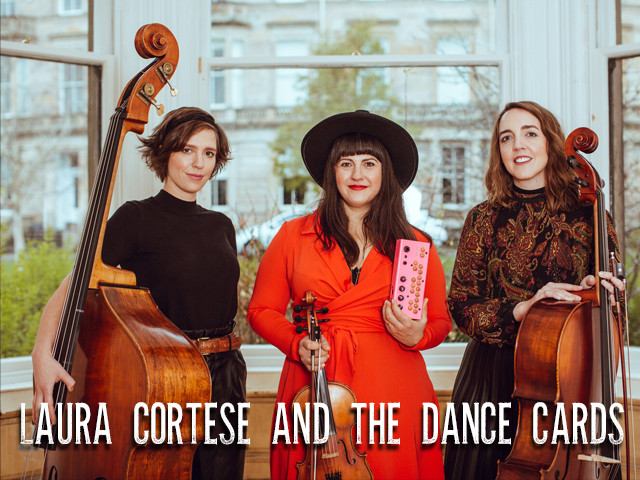 Laura Cortese and The Dance Cards

Laura Cortese has built a career weaving together a musical tapestry as diverse as it is masterful, highlighted with experiences like playing the Newport Folk Festival with Pete Seeger in 2009, standing onstage at the iconic Carnegie Hall in New York with Band of Horses in 2009, and a stint touring alongside Uncle Earl in 2007. She has recorded with artists ranging from Aoife O’Donovan and Brittany Haas to Tao Rodriguez Seeger and Session Americana, and has released 7 albums under her own name–All in Always (2016), Into the Dark (2013), Simple Heart (2012),
Two Amps 1 Microphone (2011), Acoustic Project (2010), Blow the Candle Out (2007), Even the Lost Creek (2006), and Hush (2004).

All of these threads have joined together, culminating in her work leading the musicians’ collective known as Laura Cortese & the Dance Cards. Here, she showcases all of her varied experience and expertise–as a master fiddler, an instructor, a leader, and a musical collaborator–using it to craft a new sound from whole cloth: a nearly symphonic hybrid of countless traditions and influences, full of layered vocal harmonies and rich interplays of virtuosic string instrumentation.

She has toured across the globe, acting as an ambassador of American music on behalf of the US State Department by performing and teaching in India, Kazakhstan, Uzbekistan, Bangladesh, Estonia, Greece, Ukraine, and Montenegro. Now, she holds space and builds community for musicians in
Belgium as the co-founder of the monthly Bright Lights Session in Ghent. As always, her vision is as expansive as her background. “We’re working
to basically write a new folk tradition,” she says. Were it anyone else, you’d think it impossible. But with Laura Cortese at the helm? It just might come true.

The Fallout Shelter is an all ages performance venue welcoming worldwide, world class music in an intimate setting. Our studio audience attends to watch the creation and production of the music television series The Extended Play Sessions. The Fallout Shelter events are immersive experiences for both audience and performers alike...a live music experience like no other.We have a wide selection of beer and wine for your adult beverage pleasures and each show comes with a free commemorative event poster. The Fallout Shelter requires proof of Covid Vaccination for entry. Please have your card or a photo for entry. Seating is general admission and the doors open at 6PM. We recommend you arrive at the time the doors open.