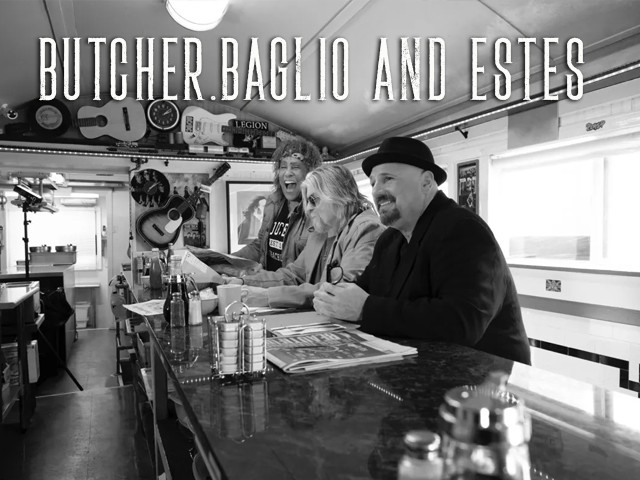 The Extended Play Sessions is super-proud to present three monumental Boston music legends Jon Butcher, Sal baglio and Allen Estes to celebrate the release of Gypsy Caravan and this night is gonna ROCK!

The eleven original songs on their upcoming album are steeped in Americana, roots rock, and tight vocal harmonies reminiscent of Crosby, Stills and
Nash and The Traveling Wilburys.

“We’re blue-collar guys from working class families, says Butcher. “We grew up on the sound of rock radio and the promise of an electric guitar. We wanted to make a record that reflected that. We tell our own stories and there’s truth in that. We did a show together at the Shalin Liu Performance Center in Rockport, MA some years ago.  It was magic, the perfect mix of electric and acoustic music. We knew then we had something special enough to take it into the studio.”

“Allen brought this idea to the table,” explains Baglio. “We each have been friends for over four decades and have performed together on various live shows over the years which made it an easy sell. I'm in!"

Recorded over four months at Bang A Song Studio in Gloucester MA and engineered by Warren Babson (Justin Bieber, Matisyahu, Lupe Fiasco, Musiq Soulchild), each member of the trio contributed songs, ideas and arrangements making this album a true collaborative effort. “We worked together in the studio on the songs, ideas came together in the studio, one of us would have a tune and the other the words” says
Estes. “As the studio process continued narrowing down the vibe and choosing what would fit.We all share mutual influences, including acts and bands that feature harmony,” he continues. “We almost know what each of the others are thinking.”

The Fallout Shelter is an all ages performance venue welcoming worldwide, world class music in an intimate setting. Our studio audience attends to watch the creation and production of the music television series The Extended Play Sessions. The Fallout Shelter events are immersive experiences for both audience and performers alike...a live music experience like no other.We have a wide selection of beer and winefor your adult beverage pleasures and each show comes with a free commemorative event poster.
Upcoming Events (1)